The tasks of the Prime Minister are many and varied, but the four most important are:

The prime minister leads the government

First and foremost, the prime minister is the head of government:

The prime minister therefore attends many meetings, has many personal contacts and examines a variety of issues. He has staff to assist him in his work but as head of government and coordinator he is in charge and he is personally involved in every issue.

The Prime Minister represents the government in dealings with Belgian institutions

The Prime Minister is both the face and the voice of the government vis-à-vis the main institutions in the country. Accordingly, he regularly attends audiences with the King, who is the head of the executive. His most prominent role is played in Parliament, where deputies and senators question and challenge him on matters of government policy.

The Prime Minister and his ministers also table bills and present them to the relevant committees of the Chamber or Senate. All of this requires effective collaboration between the executive and legislature and a Prime Minister who is able to openly defend his government and its policies before Parliament. Among other things, this entails attending formal and informal meetings and having a sound knowledge of the issues at hand.

The political face of Belgium in the world

Belgium was one of the founding members of the European Union, NATO, the Council of Europe and the United Nations. Despite being a small country, Belgium is at the heart of Europe and enjoys a high profile abroad, which is very important for the lives and well-being of its people. Like his foreign minister, the prime minister devotes a lot of time and attention to contacts with other governments and heads of government, especially in the framework of the European Union and United Nations. In particular, he attends the half-yearly summits of heads of state and government of the European Union and plays host to foreign heads of state and government and VIPs. He also defends Belgium’s interests on trips abroad.

Prime Minister of all Belgians

This accounts for the Prime Minister’s proactive approach to the media. Every Friday, he holds a press conference after the Council of Ministers meeting. He gives interviews to journalists and engages in a variety of initiatives, such as giving speeches, visiting institutions and businesses and receiving delegations. In a democratic political system, this is an essential part of the Prime Minister’s work. These activities take up a great deal of his time. However, citizens are entitled to direct contact with the head of government and clear information about government policies. The Prime Minister is therefore in touch with the public and understands the issues that concern them.

The Prime Minister is the head of the federal government, whose work he leads and coordinates. He chairs the Council of Ministers and thereby exercises his authority over ministers and, where relevant, state secretaries. His resignation usually results in that of his government. As a general rule, it is the formateur of a government (i.e. the minister responsible for forming it) who becomes prime minister.

Post-1830, although governments were known by the name of the minister responsible for forming them, the formateur did not rank any more highly than the other members of the government. From 1831, the King himself often chaired the Council of Ministers. Gradually, the role of the so-called “head of cabinet” expanded: he would propose to the King which minister should hold which portfolio and he would preside over the Council of Ministers in the King’s absence.

Only in 1918 did the Prime Minister acquire a cabinet and start to have his title mentioned on official documents (Royal Decree of 25 November 1918). Over time, the King came to chair fewer and fewer Council of Ministers meetings and the political role of the Prime Minister grew in importance, although his supremacy was still not officially recognised. He continued to combine the role with another portfolio.

After the Second World War, the Prime Minister became firmly established as head of government. His job also became more complicated. As he usually presides over a coalition, he must act as a conciliator between ministers from different parties.

Not until the revision of 1970 was the title of prime minister finally recognised in the Constitution (Article 86bis, subsequently Article 99). Most recently, the 1993 revision of the Constitution expressly linked the job of Prime Minister to the formation and resignation of governments (Article 96). 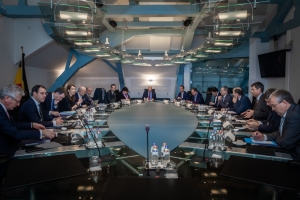