The three federal cultural institutions have a unique place in Belgium's institutional, cultural and economic landscape.

The Théâtre Royal de la Monnaie/Koninklijke Muntschouwburg (La Monnaie/De Munt for short) is an opera house that provides a base for most of the professionals involved in opera productions, including an orchestra and choirs.

The Centre for Fine Arts Brussels (BOZAR) is tasked with presenting a multidisciplinary cultural programme that enhances the European and global influence of Belgium, its Communities and the Brussels-Capital Region, through its own cultural productions as well as co-productions and various collaborations.

The core mission of the Belgian National Orchestra is to put on a range of symphonic concerts in Belgium and abroad. It mainly performs in the Henry Le Bœuf Hall at BOZAR.

Each institution has far-reaching autonomy and is run by a Board and a management team.

Their activities are supervised on behalf of the Belgian federal government by two government commissioners, as well as one representative of the Minister of the Budget for each institution.

The management contracts reflect the public service missions entrusted by law to the three institutions. In these contracts, the institutions have made a series of commitments to modernise their operations and optimise their development.

The appropriate investments in infrastructure are continuing, with the assistance of Beliris in particular.

For the Belgian National Orchestra, Amendment No. 13 of the cooperation agreement between the Belgian federal government and Brussels-Capital Region earmarks a budget of €3.5 million for a complete transformation of the rehearsal room. At the same time, improved diary management should enable more extensive use to be made of the Henry Le Bœuf Hall at BOZAR.

Also at BOZAR, work is due to start on refurbishing Hall M and the Studio. A budget has also been set aside for access to the Belgian National Orchestra's rehearsal room, and studies regarding access to/from Rue Royale/Koningsstraat are under way.

Investments are being made in various areas, including digitalisation and promoting energy savings. The Belgian Buildings Agency is also refurbishing, among other things, the Ravenstein Wing, the electrical installations and the roofs.

At La Monnaie, the rollout of the masterplan is being completed with a tunnel connecting the workshops and the opera house.

This will greatly facilitate communication and the transport of equipment between these two spaces.

Beliris is also planning to build a wardrobe facility for costumes and to undertake a large-scale renovation of the building's facade.

Further information can be found on the following websites: 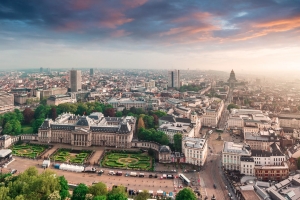